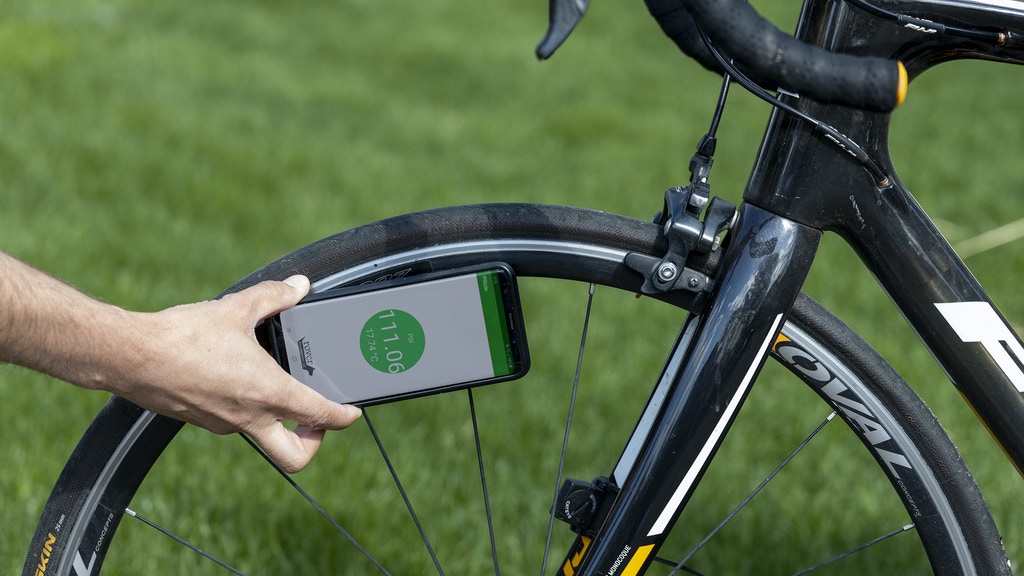 Measures your bike's tire pressure with your phone. Spot check pressure before rides, after fixing flats, or fine-tune on the trail.

Latest Updates from Our Project:

This month we were able to have a small batch of trial sensors molded and the circuit boards survived the molding process.  Proving this out was obviously key to making the sensor work.  We had previously injected molded over the circuit boards with hard plastic, but the rubber process we're using now uses a solid rubber preform in the mold, and it was possible that it would put more pressure on the circuit board and that it could damage it.  This didn't happen to any of the sensors, and they look great:

We also had the vendor test some transfer printing, which you can see on the right side of the picture.  That will allow us to differentiate the LP and HP sensors without needing to have different molds for each.

The big issue now is that the rubber isn't sealing well to the extension.  The leakage we are seeing would not be acceptable for any bike tires.  The vendor thinks, and we agree, that they used rubber that was too soft.  The vendor has needed to do a lot more process development than we expected.  It's possible they could solve the leakage soon, but it's also possible they might never solve it.  It doesn't help that the vendor is in Taiwan, so there can be language and timezone issues.  It's also much harder to visit them.

We know the leakage has to be solvable because the materials we are using are the same as those used in car tire valves and they form completely air-tight bonds with the brass valve body.  We're talking to a backup vendor now who has more experience with rubber molding, and they are very confident they could make the assembly leak-free without significant changes to the design.  The prototype tool we have now can only mold one sensor at a time, so each sensor takes several minutes to mold.  We knew we were going to need to buy a larger mold to make more sensors at a time, and so we'll need to decide if we are going to buy that through the current vendor or the backup.  The backup vendor is in the US and it would be a lot easier for us to visit them to work out processing kinks.  They're quite a bit more expensive, but it could be worth it to get everything working right.

Next week, we'll be receiving one of the custom die-cut parts that goes inside the sensor that makes the NFC work next to the metal extension tube.  Once we have those, we can place the order for the circuit boards, and those are quoted to take about 8 weeks to come in.  While we're waiting on those, we'll monitor the leakage fix progress with the Taiwan vendor and determine which vendor we'll use for production.

Another issue that we've run into but think we have resolved is the global electronic component shortage.  We have enough components right now to build 1000 sensors, but we have 1600 sensors to build.  We have been unable to source the last 600 components we need to build those sensors - the lead time for the last 600 components is over a year!  However, going into the Kickstarter, we had a few different designs that we knew would work, so we are currently evaluating what it would take to put a backup design into production instead.

So we are making progress, but it continues to be much slower than we anticipated.  Last month we said early bird sensors wouldn't ship until December, but now it looks more like January.  We anticipate we'll make all the sensors around the same time, so the later backers will ship around the same time as the early birds ship.  We appreciate your support and patience, and we are eager to get the first sensors in your hands.  Kickstarter has posted a good article summarizing some of the supply issues we're seeing right now.  It's definitely worth a read if you want to understand more about why it's hard to get things built at this point in time.

If you have not filled out your survey to give us your sensor selection and address, please do so as soon as possible.  It seems that anyone using privaterelay@appleid.com is NOT getting our emails about filling out their survey.  Everyone please check to ensure your survey is completed by visiting https://psicle-sensor.backerkit.com/

We can't ship you the right sensors unless we can reach you!

Hello backers!  It's time for a three month update.  Things are going well, if a bit slower than expected.

First, and most exciting, we have the first mold trials underway with the prototype  molds at the vendor.  So far, they're looking good (see picture below), and some of the major things that could have gone wrong did not.  So far, we have not tested any active circuit boards in the prototype mold, but we will soon mold and test some sensors to see how they perform.

We have also finalized all the prints and procedures and have been ordering components.  The circuit boards for the early birds will be ordered soon.  Once those are done, we can mold some more on the prototype mold.  Then we'll test them and potentially send them to the early bird backers if they perform well.  The mold time on the prototype mold is going to be much slower than we originally thought, so we'll need to order a production mold for most of the sensor molding.  We'll probably be able to get a few tens of units off the prototype mold, and that will give us units to test to build confidence in the production mold design before we make that.


On the topic of circuit boards, we ordered some special prototype circuits from PCBWay and not only was PCBWay incredibly easy to work with, the circuits were of the highest quality, and they even shipped us a few extra units.  We ordered flexible circuits to prototype a different concept, and the turnaround was very fast, the price was low, and they were also able to add a stiffener to selective areas of the circuit.  We haven't been able to do this with other quick turn circuit board suppliers, so this was great!  If you find yourself in need of any circuit boards or flexible circuits, you should check out PCBWay.  They even do circuit board assembly!


So now on to schedule: when we planned the project schedule in May, we believed that Covid was behind us and that manufacturing and travel would be starting back up.  Little did we know that so many new problems were going to start.  We are seeing manufacturing delays, component sourcing issues, shipping shortages, and now even power outages in China.  Suppliers are backed up everywhere, and delays are the topic of the day.  As for us, we're still moving forward.  The mold is at least a month behind where we thought it would be based on the quote, which pushes everything else back a month.  It's unclear what other delays are in front of us, but it's safe to assume there will be more.  We are trying to expedite all the components so we're ready to mold when the mold is done, but at this point, it looks like it will probably be December before the early bird sensors are likely to ship.  We know these delays aren't what anyone wanted to hear, so we're expediting out plans and being a little less conservative to keep some pieces moving while we wait on other pieces.  We should have a much clearer picture of the schedule in front of us in the next few weeks as all the parts start coming in and we will keep you posted!

Hello everyone!  We've made a lot of progress in the past month, but we're taking a meticulous approach to maximize the quality of the end product.  We are testing things out gradually, and moving cautiously rather than spending a whole bunch of money trying to move fast.P

We revised the extension design based kn feedback from our molder, and we ordered and received revised anodized aluminum extensions.  Note that the extensions are finally anodized black, and the molding will be black, so we'll have all black sensors in production.

Sample sensor circuit boards are off to the vendor, along with the preproduction extensions.  The vendor is looking at if the mold quote needs any revision since this is the first time they've been able to see production-ready parts.  After they revise the quote, we'll pay for the mold, and 21 days later we should see some early prototypes that we can thoroughly test to ensure they're meeting our expectations before we build more.  Its lookkng like we will see those first parts around the end of September.  We want to thoroughly test the preproduction units before we ship the early bird units, so we may push the early bird shipments into October.  We will keep you all updated on status.

Hello everyone!  First off, we just wanted to remind those of you who have not completed the surveys sent by Backerkit to do so as soon as possible.  The surveys enable us to get the counts on the HP/LP variants for manufacturing, which we need to be able to do to place orders.  If you've lost your survey link you can recover it here.

Now for a few updates on how we're progressing.  We have been working with the suppliers to refine the design into something they feel that they can produce with the best yields while still maintaining the design intent.  In order to achieve appropriate manufacturing yield, our supplier requested that we increase the aluminum extension to 35 mm from 30 mm, so we've done that.  We've also added PSIcle and roverdev.us branding to the front, and the sensor type (HP/LP) and a date code (the large circle) on the back.  Fundamentally, these won't change the weight or use of the sensors.  Note that the sensors will be black aluminum and black rubber, and not the color in the images below.

We're trying to be cautious about spending the funds wisely, so we're taking it a little slow in terms of ordering parts.  We just ordered a small number of aluminum extensions and we will send these and some circuit boards to the molding vendor so they can test out the process on some samples.  We will QA and field test these finished sensors to ensure they are standing up to our expectations and then we'll build the larger numbers of sensors.  We expect these first trial sensors to come off the mold in late August.

We'll keep you posted on how the mold trials go, but between now and then, please finish those surveys!

Thanks to all our supporters!

Thanks to all of our backers, we've made the campaign goal!  We are thrilled to finish our work on the builds of the sensors and to ship sensors to all of you.

We will be sending a Backerkit survey in about 14 days to ask what type of sensors you would like for your pledge.  Note that although we originally only said the low pressure sensor would go from 0 to 40 psi, we determined that it's suitable for 0-50 psi instead.  This means you can have the incredible accuracy of the LP sensor all the way up to 50 psi.

More to follow, and we'll keep working in the background before the survey goes out!